NEW DELHI: : Six parties from the erstwhile Janata Parivar are set to merge on Wednesday under the leadership of Mulayam Singh Yadav, a 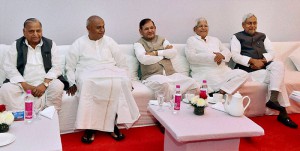 development which comes ahead of Bihar Assembly elections slated later this year and the 2017 Uttar Pradesh Assembly polls.
A formal announcement of the new entity to be named either Samajwadi Janata Party of Samajwadi Janata Dal with cycle as its symbol is set to be made tomorrow after a meeting at Yadav’s residence.
The meeting is expected to be attended by Bihar Chief Minister Nitish Kumar, JD(U) chief Sharad Yadav, its general secretary KC Tyagi, JD(S) chief and former prime minister HD Devegowda, RJD chief Lalu Prasad, Samajwadi Janata Party chief Kamal Morarka and INLD leader Dushyant Chautala besides Mualyam Singh Yadav’s brother Ramgopal Yadav.
Nitish Kumar, a key face of the grand alliance, is set to arrive in the national capital this evening.”We are meeting for the final announcement. Leaders of all these parties have already talked to each other and all issues have been resolved. We expect the announcement tomorrow,” Says Tyagi.
Sources said that after discussions, there is an agreement that the new entity will retain the cycle symbol of Samajwadi Party.On April 5, RJD chief Lalu Prasad had given the slogan of “Ek Jhanda, Ek Nishan” (one flag, one symbol), almost announcing the merger and had dared the BJP to come to Bihar
“As far as Janata Parivar, the six parties are concerned, their merger has happened and SP chief Mulayam Singh Yadav will formally announce it because he has been authorised for it.
“Merger means merger.There should be no doubts about it. Only one symbol and no other shall remain because different symbols will create confusion among the public.We will also?ask other secular parties to join the new party to combat communalism,” Prasad had said.
The very next day, the leaders of these off-shoot outfits of Janata Parivar had come to the national capital to pay homage to former deputy prime minister Devi Lal, a prominent leader of the grouping and Lok Dal founder, on his death anniversary.