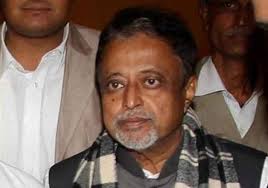 KOLKATA: In a big political development, which is expected to send ripples across West Bengal politics, the Trinamool Congress on Friday removed MP Mukul Roy from the parliamentary party chairman’s post.
The drastic step was taken by the TMC amid speculation of a rift between Roy and West Bengal Chief Minister and party chief Mamata Banerjee. Roy was once considered to be second-in-command of Trinamool.
Lately, Banerjee had clipped Roy’s wings by appointing party MP Subrata Bakshi, additional all India general secretary, in an organisational reshuffle on February 14.
Roy, a former railway minister, has seemingly fallen out with Banerjee after his interrogation by the Central Bureau of Investigation in connection with the multi-crore rupee Saradha ponzi scam.
A founding member of the Trinamool, he has distanced himself from the party and shied away from attacking the BJP over the past few weeks. Credited as the architect of Trinamool’s stunning electoral victories in recent years, Roy played a minor role in Friday’s by-poll to Bongaon Lok Sabha and Krishnaganj Assembly constituencies.
Roy’s sacking comes a day after the TMC expelled party leader and former state minister Humayun Kabir on disciplinary grounds following his rant against party supremo Mamata Banerjee.
Kabir, an influential leader from Murshidabad district, had on Wednesday slammed Banerjee for projecting her nephew Abhishek Banerjee as her successor and undermining party general secretary Mukul Roy.
Kabir had publicly shown his allegiance to Roy.Trinamool has also suspended its MLA from Suri, Swapan Kanti Ghosh, on disciplinary grounds after he staged a demonstration in the Assembly premises alleging misappropriation of funds meant for central projects.