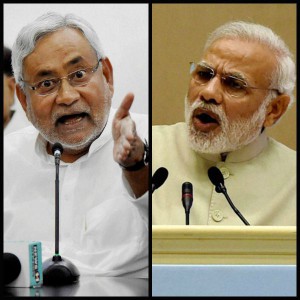 PATNA: After PM Narendra Modi hit out at Bihar CM Nitish Kumar for visting a tantrik, well known astrologer Bejan Daruwalla revealed on Sunday that the prime minister had consulted him earlier.
‘…Jungle raj’ has got its twin brother. ‘Jungle raj’ and ‘jantar mantar ka raj’ have come together to destroy Bihar. Those who don’t believe in democracy do black magic. Don’t let these two come together, otherwise it will only destroy Bihar,” Prime Minister Modi said while addressing an election rally here.
In what could help the Opposition, Daruwalla said that Modi had visited him during which he predicted ‘progress and development of the nation lay in the hands of Narendra Modi’.
In a photo with ABP news, PM Modi is seen showing his hand to Daruwalla.BJP had earlier sent out a video which showed Nitish Kumar meeting and hugging a tantrik. The tantrik is heard to saying Nitish jindabad, Lalu murdabad’.