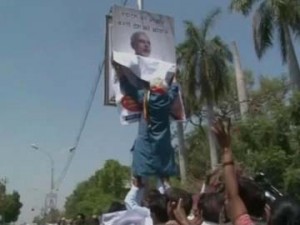 BADODARA: Madhusudhan Mistry, the Congressman who is running against Narendra Modi in Vadodara, was detained this morning along with supporters for pulling down posters of the BJP’s prime ministerial candidate. The Congress group tried to replace Mr Modi’s advertisements with those of Mr Mistry.
The BJP has put over a thousand hoardings of Mr Modi across the city. The party had booked all major advertisement kiosks and billboards in Vadodara a month ago. Mr Mistry, after being named as Mr Modi’s challenger from Vadodara, demanded an equal share in the space allocated for putting up election-related posters. The municipal corporation refused, arguing that these locations have already been allotted to the BJP.
Mr Mistry told NDTV today that police and district officials were giving the BJP unfair and blatantly preferential treatment. Mr Modi is running for Parliament from Vadodara in Gujarat and Varanasi in Uttar Pradesh. This is his first national election; he is currently a member of the Gujarat state legislature.The Congress has yet to announce who will run against the 64-year-old BJP leader in Uttar Pradesh.
Under Mr Modi, the BJP is expected to deliver one of its strongest performances ever. Opinion polls say though it will get the maximum seats, it will fall short of a majority. Mr Mistry, 69, is a Member of Parliament. He is a General Secretary of the Congress and is considered to be close to the party’s young vice-president, Rahul Gandhi, who is leading the campaign for the national election. He is in-charge of the party’s affairs in Uttar Pradesh.