KOLKATA:  As state BJP sources talk about Modi’s last Bengal rounds likely to begin from tomorrow at Bankura and thence to Asansol, TMC with only campaigner Mamata Banerjee but state Congress (despite many) with none in Bengal, got shaken up.While West Bengal Chief Minister and Trinamool Congress leader Mamata Banerjee today blamed it to a `plot by the BJP, Congress, CPI(M)’ to defeat her efforts,’ Pradesh Congress Chief Adhir Chowdury today saw “an evil link between TMC and BJP.’’ 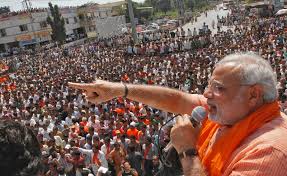 But more than anything else what seems to have shaken up the state Congress has been `no response yet from the part high command’ from Delhi to grace them with at least two campaigns to hit back the BJP’s efforts to invade Bengal.The CPI(M)-led Left Front, which already (Prakash Karat and Buddhadeb Bhattacharya) pledged its support to Congress after a “favourable post-poll outcome,’’ according to political observers, may have already admitted a bad outcome in Bengal, “isn’t really worried over BJP’s repeated attempts to invade Bengal.’’
“After all Left’s half-hearted backing to Manmohan Singh’s economic reforms till it did not shake hands with Pentagon, and with its disastrous economic fallouts on common man, Left invited its ruins and not left with much to worry,’’ a left-leaning commentator said. But for good reasons BJP’s efforts to stir up heat and dust in Bengal, a state which gave the party nothing nor BJP-led NDA giving nothing much, keeps political majors and minors worried.
Though BJP president Rajnath even yesterday promised a special financial package for debt-ridden Bengal, but Modi’s last rounds only keep them guessing which way the attack may come?