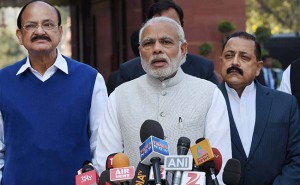 NEW DELHI: The BJP has decided to go aggressive in the debate in Parliament tomorrow on the JNU controversy. The government and opposition have agreed to the debate so Parliament can function in the crucial Budget session that began today.
Here are the latest developments:
Prime Minister Narendra Modi told BJP lawmakers this evening to “aggressively debate” the JNU issue in Parliament tomorrow. He was speaking at the BJP Parliamentary party executive committee meeting.
Finance Minister Arun Jaitley briefed party lawmakers on the sedition law and other legal aspects of the JNU controversy, sources said. The Opposition has agreed to allow both Houses to function if the government agrees to debate key issues first and bring bills later.
Before the session started today Prime Minister Narendra Modi said, “The country is watching eagerly… I believe that Parliament’s time shall be utilised and constructive dialogue will take place.” The Opposition, PM Modi said, “has shown positive steps.”
“I urge all Members of Parliament to discharge their solemn responsibilities in a spirit of cooperation and mutual accommodation,” President Pranab Mukherjee said in his address to both houses of Parliament,  calling for  “debate and discussion, and not disruption or obstruction.”
“My government will constantly strive for smooth and constructive conduct of Parliamentary business.  Let us all collectively endeavour to build a flourishing and prosperous India,” the President said.
Several Parliament sessions in the recent past have been washed out with the opposition holding up proceedings in the Rajya Sabha with protests on various issues, taking advantage of the government being in a minority in the upper house.
The President’s call for debate and an end to disruptions is expected to set the tone for the Budget session; political parties will find it difficult to breach the line drawn by the Constitutional head of the country.
After the President’s address leaders of most political parties said the budget session may not go the way the last few sessions have. The CPM’s Sitaram Yechury said the opposition is committed to the smooth functioning of Parliament so that people’s issues can be raised.
At a meeting on Monday, the Congress-led opposition said it would aid a “disruption-free session” if the government agreed to discuss issues it wants to bring up first. Its formula – debates first, the government’s agenda like the key Goods and Services Tax or GST bill later.
The Union Budget is scheduled for next Monday, February 29. The Railway Budget will be presented on Thursday, February 25 and the Economic Survey on Friday, February 26. The Budget session will be on till May 13, with a recess from March 16 to April 25.