KOLKATA: `I have won Bengal’s heart,’’ said BJP’s prime ministerial Narendra Modi in Krishnanagar in Nadia District today on his fourth round of campaign in Bengal as a big audience greeted him with success.
And even as BJP’s prime ministerial admitted `surprise’ over change in Mamata Banerjee’s stand from 2005 on several issues, primarily “on the issue of suspicious Bangladeshis, but not refugees (who sought shelter in Bengal after being persecuted on the other side).’’
To be factually correct, Modi said: “In 2005 Didi created a storm in Parliament on this issue alone…but now she has changed.’’To blunt both the TMC and CPI(M) attack on him for “me having stirred up communal heat, Modi was correct in quoting former CPI(M) chief minister Buddadeb Bhatt 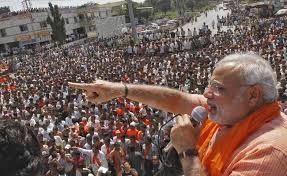 acharjee telling reporters at Writers’ Buildings in early 2000s: “I am deeply concerned over people in madarsas in border districts (with Bangladesh),’’ though next day due to party pressure he had to eat up his words which Modi was not informed about by the local party leaders!
Modi who couldn’t be more blunt or didn’t know that the BSF South Bengal headquarters in Kolkata sent a report about pro-Pakistani Jammat pushing trouble-makers across the boarder, “simply terrorists, who are joining as voters.’’
Coming to more realistic issues now would be deciding the political swing, Modi was greeted with cheers again when he said: “Didi, Congress and CPI(M) all are saying TOP MODI, but not inflation, improve job conditions for jobless now making life misarable for the youth and millions of common man.’’
While confident Modi said “after elections, “Congress will be washed out from India for its painting a fake rosy picture of India with millions of poor, they all (TMC, CPI(M) joined hands to saving a sinking boat like Congress.’’
“I have not come to hurt Didi, but I am certainly not what they are painting me like,’’ Modi said raising both local and nation issues.Incidentally, it’s also factually correct that no earlier prime ministerial candidate devoted so much time for Bengal, beginning from Nehru, Indira Gandhi or any one else during polls.
While observers are uncertain about Modi’s side-effects on electoral fortunes of strong local majors, the most disturbed it seemed the TMC.
Like Modi first praised `Didi’ in Brigade but gradually slipped into opposing her with “worried Mamata began describing him as `communal face and shouldn’t be supported,’’ and last one being “butcher of Bengal!’’Feel observers. “Didi is following CPI(M) which destroyed Bengal,” Modi cut in.