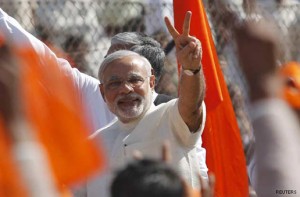 LUCKNOW: Narendra Modi, set to be the next prime minister, will Saturday pay a thanks giving visit to Varanasi, the second Lok Sabha constituency from which he won handsomely.Party leaders said Modi will fly into the temple town from New Delhi after the BJP’s parliamentary board meeting and will reach Varanasi around 5 p.m.
He will proceed straight to the Kashi Vishwanath temple and then address a public rally before taking part in the evening Ganga Arti on the bank of the river Ganga.
Modi had been denied permission for an election rally and another event in the city May 10 by the district administration during the campaign.
Now, the Varanasi authorities are rolling out a red carpet to welcome Modi who led the Bharatiya Janata Party to a spectacular win in the Lok Sabha election.Modi won from Varanasi by over three lakh votes. He polled 5.81 lakh votes while his nearest rival, AAP leader Arvind Kejriwal, got 2.09 lakh votes. All other candidates forfeited their deposits.