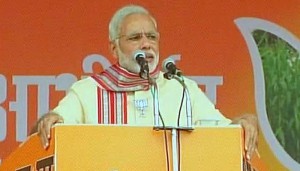 MUMBAI:  : In his first rally of the day at Maharashtra’s Tasgaon, Sangli district, Prime Minister Narendra Modi explained his silence on the Shiv Sena, saying it was “out of respect” for the late Balasaheb Thackeray.”This is the first election in Balasahab’s absence. I will not say a word against Shiv Sena, it is my tribute to Balasahab Thackeray,” PM Modi said. In his first three rallies in the state on Saturday also, Mr Modi made no reference to the Sena.
But his response today was an arch reference to the recent criticism by Sena chief Uddhav Thackeray, who had blamed the “new generation of leaders” for the split with the BJP.
Referring to the losses of Balasaheb and BJP leaders Pramod Mahajan and Gopinath Munde, Mr Thackeray had said, “It is not as if there had been no difference in the past 25 years. People knew how far to stretch it. But now there is a new generation of leaders.”
At the same time, the Prime Minister made it clear that alliance politics had let Maharashtra down and the people should give a clear mandate to the BJP – as in the Lok Sabha elections.
“Never let a coalition government rule Maharashtra. Your problems so far were caused by alliance politics. So help us win with a huge majority and ask me a report card of our work after five years,” PM Modi said. The Prime Minister also launched a direct attack on NCP chief Sharad Pawar, claiming he didn’t have the character to imbibe the qualities of Chhatrapati Shivaji.
“Sharad Pawar ji, you were a Chief Minister and also an agriculture minister in the UPA government. What have you done for the people here? Could you even provide water?” the Prime Minister said.
Mr Pawar, whose NCP has been accused of being in talks with the BJP – and hence the break with the Congress – had also publicly praised the PM for successfully marketing  India during his trip to the US.Today Mr Modi said, “India’s voice is being heard in America today. It is not Modi’s charisma, but it’s the voice of the billion people out here.”