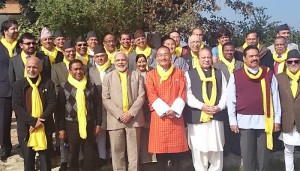 KATHMANDU: A day after Pakistan blocked the signing three key proposals initiated by India for greater regional integration, Prime Minister Narendra Modi on Thursday met with his counterpart Nawaz Sharif when the leaders of the South Asian nations were at an informal retreat in Dhulikhel on the concluding day of the SAARC summit.
The two leaders shook hands and met briefly during the retreat and Nepali Prime Minister Sushil Koirala appealed the leaders of the two countries should hold talks with each other in an attempt to salvage the derailed summit.Even yesterday at the summit, PM Modi and Sharif did not even look at each other while sharing the dais and have shared cold vibes since the beginning of the SAARC summit.
The Pakistani PM will leave from Kathmandu today in the evening, earlier than scheduled, and will miss a banquet and a meeting with the Nepal President.Both Modi and Sharif were in the same row at dinner and were chatting with each other, said a diplomat, adding that the talking appeared to be informal in nature.
Both the prime ministers have taken a tour in and around the Dhulikhel resort which is famous for its magnificent view of the Himalayas. Leaders will spend almost five hours at the retreat. Nepal, the host country, is pushing for talks between India and Pakistan and at least a Saarc related energy accord. But a planned meeting between the two South Asian leaders has not taken place.
As of now, both leaders have not met separately at the retreat, but Nepal and other Saarc members are pushing them to sit for talks as they believe that Saarc cannot get off the ground till India and Pakistan resolve their bilateral problems. Other countries have in the past accused the region’s two biggest countries of holding down Saarc’s growth and development. Both Modi and Sharif also briefly shook hands after the inaugural session of the summit as well as in the holding room adjacent to the Saarc summit hall.
Pakistan Wednesday played spoilsport by blocking three major Saarc connectivity projects initiated by India.While Modi, who gave a forceful maiden speech at the summit on the need for seamless connectivity, met his Bangladeshi and Bhutanese counterparts Sheikh Hasina and Tshering Tobgay, and later the presidents of Afghanistan, Sri Lanka and Maldives, Ashraf Ghani, Mahinda Rajapaksa and Abdulla Yameen, Sharif was not on the list.
India’s external affairs ministry spokesperson Syed Akbaruddin Wednesday said there was “no structured meeting” planned between the two leaders as India has not received any request for such a meet from Pakistan.