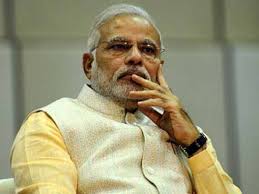 NEW DELHI : In his first public comments since India called off high-level talks with Pakistan last week, Prime Minister Narendra Modi said Islamabad had made a “spectacle” of the tentative peace process by meeting with separatist leaders from Kashmir, but added that India seeks “peaceful, friendly and cooperative ties” with its neighbor.
Responding to questions from journalists before a visit to Japan, Modi said that his first meeting with Prime Minister Nawaz Sharif of Pakistan in May had been “very good.” “We, therefore, were disappointed that Pakistan sought to make a spectacle of these efforts and went ahead with talks with secessionist elements from Jammu and Kashmir in New Delhi just prior to the meeting of the foreign secretaries,” Modi said. He went on to say that “any meaningful bilateral dialogue necessarily requires an environment that is free from terrorism and violence.
” His remarks came as the two countries took steps to end two weeks of unusually heavy artillery fire between opposing forces along the border of India and Pakistan. Nightly mortar attacks have resulted in the deaths of two Indian and four Pakistani civilians since mid-August, but this week has brought a lull as commanders met to arrange further talks. Modi also clarified his position on India’s nuclear doctrine, telling a reporter there were no immediate plans to revise it.
The question arose because of wording in the manifesto published this spring by Modi’s Bharatiya Janata Party, which promised to “study in detail India’s nuclear doctrine, and revise and update it, to make it relevant to challenges of current times.” The statement was read by some as an expression of willingness to drop India’s longstanding no-first-use policy. “While every government naturally takes into account the latest assessment of strategic scenarios and makes adjustments as necessary, there is a tradition of national consensus and continuity on such issues,” Modi said, according to a transcript posted on the website of the Ministry of External Affairs.
“I can tell you that currently, we are not taking any initiative for a review of our nuclear doctrine.” While in Japan, Modi is expected to push for a civilian nuclear trade deal similar to the one India signed with the United States in 2008, which allowed New Delhi to continue weapons development and nuclear testing. Japan, however, has pressed for guarantees that India will not conduct nuclear tests or enrich or reprocess spent fuel. © 2014, The New York Times News Service