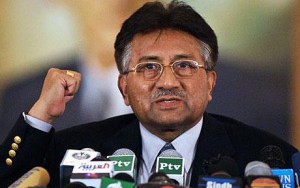 LAHORE: Pakistan’s former president Pervez Musharraf stated that Prime Minister Narendra Modi has problemS with Pakistan and Muslims.
In an interview to Channel 92, Musharraf said that the present conflict between India and Pakistan was not an ideology based issue of a particular ruling party, but due to an ‘individual’.

“We have dealt with both the BJP and Congress and it is not an issue of parties, but of an individual. In India, there is a new Prime Minister. I don’t know what his problem with Pakistan and Muslim,” Musharraf said.
“Vajpayee sir was also from the BJP, but he was a simple and an incredible man. He had the sincerity to resolve conflicts. Sonia Gandhi also shares similar views with Vajpayee. And that’s why we were moving forward toward conflict resolutions,” he added.

While talking about the Dadri incident where a 52-year-old man was lynched to death for allegedly consuming cow beef, Musharraf said the organisation that was behind such acts and were doing similar acts should be declared as ‘terrorist’ groups.
“Shiv Sena is an extremist organisation. The Pakistan government should appeal to the United Nations to declare it as an extremist organisation, terrorist organisation,” he said.
The former president had recently admitted that Pakistan nurtured militancy and supported extremist groups including Lashkar-e-Taiba (LeT) in the 1990s to carry out terrorist activities in Kashmir.
He also branded Osama Bin Laden, Jama’at-ud-Da’wah chief Hafiz Saeed and LeT leader Zakiur Rehman Lakhvi, as Pakistani ‘heroes’