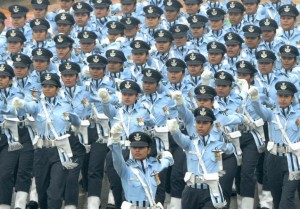 NEW DELHI: By June 2017 first batch of women fighter pilots would be serving the Indian Air Force, altering dramatically the male dominated Indian military’s combat frontiers.
“The Ministry of Defence has approved the induction of women into the fighter (combat) stream of the IAF,” a statement from the Ministry of Defence said Saturday.
According to the announcement, the first women pilots for flying fighters would be selected from the batch which is presently undergoing flying training at Air Force Academy in Hyderabad. “After successful completion of ab-initio training, they would be commissioned in the fighter stream in June 2016. Thereafter, they would undergo advanced training for one year and would enter fighter cockpit by June 2017,” the statement said.
“Since their induction into the transport and helicopter streams of the IAF, their performance has been praiseworthy and at par with male counterparts. Inducting women into the fighter stream would provide them with an equal opportunity to prove their mettle in combat roles as well,” the statement said.
Formal entry of women
The induction of women into fighter stream would be the first formal entry of women into combat role with any arm of the Indian military. As of now, they are not allowed into the combat arms of the army, navy or air force, which includes regiments of infantry and armoured corps, warships and the fighter aircraft.
Presently, the army inducts women into signals, engineers, army aviation, army air defence, electronics and mechanical engineers, army service corps, Army Ordinance Corps, Intelligence Corps, Army Education Corps and Judge Advocate General branches.

In the navy, they are allowed into all branches other than the submarines, other ships and flying. In the air force, they are allowed to fly helicopters and transport aircraft, and into most other branches but not fighters.
The MOD decision, coming a few days after the air force chief announced the plan to induct women into fighter stream, would mean all branches and streams of IAF would now be open to women.
The MOD also said that it has taken up “a comprehensive review pertaining to induction of women in armed forces both in short service commission and permanent commission and one finalised more and more branches would be opened up for induction of women to give them the space with they deserve in the armed forces of the country.”