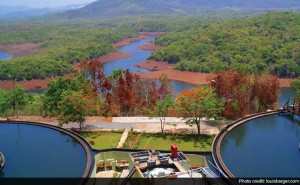 WASHINGTON:  A New Jersey-based construction management firm has been charged with bribing Indian officials several crores of rupees to win two major water developmental projects in Goa and in Guwahati.
The bribery of $976,630 for a Goa project by Louis Berger included payments to a minister, details of which have not been disclosed by the US Department of Justice.
Yesterday, the company agreed to pay $17.1 million criminal fine to resolve charges that it bribed officials in India, Indonesia, Vietnam and Kuwait to secure government construction management contracts.
Two of its former executives – Richard Hirsch (61) of Philippines, and James McClung (59) of the UAE – pleaded guilty to the bribery charges.McClung previously served as senior vice president responsible for the firm’s operations in India and in Vietnam

Sentencing hearings for Hirsch and McClung are scheduled for November 5, 2015.The Indian government, assisted by Japanese government, initiated the five-year Goa Water Supply and Sewerage Project to expand, rehabilitate and build water and sewerage facilities.Louis Berger was part of a consortium for the project in Goa. The consortium included two Japanese firms and an Indian partner.
The team developed a project management information system and plan, evaluated bids, reviewed design and construction plans, and ensured quality work was done on time and within budget, the company says on its website.
Federal prosecutors, in their 11-page chargesheet, alleged that Louis Berger maintained a detailed diary and account of bribery made to Indian officials.On August 26, 2010, “a consortium partner prepared a payment tracking schedule stating that the company had paid $976,630 in bribes in connection with the Goa project to date,” federal prosecutors told a court in New Jersey.
On August 17, 2010, a consortium partner sent an e-mail to James McClung, stating, “As discussed I enclose the details as provided by [third-party intermediary]. I have also added the details of amounts paid to [the Company] as of date by [the consortium partner] in the same sheet.”
The attachment included an entry, “Paid by [an agent of the company] to minister on behalf of agent,” said federal prosecutors.According to court documents, the company, through its employees and agents, together with others, used terms like “commitment fee,” “counterpart per diem,” “marketing fee” and “field operations expenses” as code words to conceal the true nature of the bribe payments and utilised cash disbursement forms and invoices which did not truthfully describe the services provided of the purpose of the payment.
In India since 1998, Louis Berger has offices in Gurgaon, Mumbai, Chennai and Hyderabad.”Along with several consortium partners, the company won two water development projects in Goa and Guwahati. The company paid bribes to win both of these contracts,” federal prosecutors alleged.
According to court documents, the company through its employees and agents and its consortium partners kept track of the bribe payment by a circulating spreadsheet among themselves showing the proportionate share of each bribe that they had paid to the foreign officials overseeing their work on the Goa and Guwahati projects.