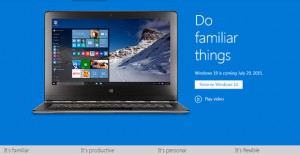 TOKYO: Microsoft Corporation began rolling out its new operating Windows 10 system in Japan on Wednesday.It has began with members here registering with its “Insider” programme among the first to receive the free upgrade.
Replete with a redesigned web browser called Edge and Cortana, a Siri-like voice activated assistant, Microsoft is looking to recapture some of the market share lost to rivals Apple and Google and lay to rest the ghosts associated with its 2012 Windows 8 system, Xinhua reported.
Microsoft, while retaining some of the features of its unpopular Windows 8, such as “live tiles” for touch-based computing, the company decided to forego the release of a 9th version and jumped straight to the release of 10.
The company said that it had retained, fused and improved upon the best features from its more successful Windows 7 and Windows 8 installments.
It also said that its latest operating system had been designed to work across different hardware platforms, including personal computers, tablets and smartphones, its Xbox games console and HoloLens — Microsoft`s holographic headset.
Along with the innovative `live tiles`, Microsoft has upped its game by following its consumers` recommendations to bring pack the iconic `Start` menu, after the company dropped it from its previous upgrade.
The software update will be free for one year, the company has confirmed, a move market insiders believe is a bid to better compete with Google and Apple, particularly in the burgeoning phone market.
The package is available as free upgrade for those currently using Windows 7 and Windows 8.1. Those using older versions will first have to first upgrade to 8.1 to get the free update. Those not eligible will be required to pay around $119 for Windows 10 Home and $199 for Windows 10 Pro.