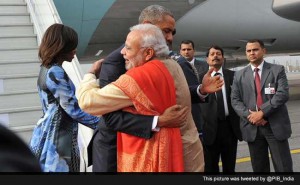 NEW DELHI : US President Barack Obama landed in New Delhi on Sunday for the start of a three-day visit to India, receiving a hug from Prime Minister Narendra Modi as he disembarked from Air Force One.
In a departure from protocol, Mr Modi drove to the airport to greet the President and his wife, Michelle.  POTUS, who landed in the overcast capital at around 9:40 am (0410 GMT), was accorded a red-carpet welcome.
He then used his armored limousine, the Beast, to drive to the five-star ITC Maurya hotel, before heading to Rashtrapati Bhawan for a reception.  The Beast had the Indian and US flags fluttering on its bonnet.
The two leaders are due to hold detailed talks later on Sunday on a range of issues including climate change, defence cooperation and a long-delayed civil nuclear power agreement.
Mr Obama, who is the first US president to travel to India twice while in office, will also be the chief guest at Monday’s Republic Day parade in the capital.
The visit, which follows a summit in Washington in September, comes less than a year since the Obama administration effectively ended its blacklisting of Mr Modi over deadly communal riots in Gujarat in 2002 while he was Chief Minister.
President Obama was meant to visit the Taj Mahal on Tuesday, but he has scrapped that leg of his trip in order to visit Saudi Arabia to pay his condolences following the death of King Abdullah.