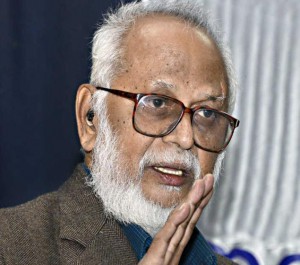 BANGALURU: Journalist and writer M.S. Prabhakara, who worked with The Hindu and Frontline for two decades, has been chosen for the annual Special Award of the Karnataka Media Academy for his lifetime contribution to journalism.
The annual awards for 2014 were announced by the academy on Wednesday, and will be presented on April 16 by Chief Minister Siddaramaiah at the Vidhana Soudha. Mr. Prabhakara taught English literature at Bengaluru, Dharwad and Guwahati, before moving to Mumbai in 1975 to join the Economic and Political Weekly . He returned to Guwahati in 1983 to work as a Special Correspondent for The Hindu and later Frontline and worked there for 10 years, writing extensively on the northeast. In 1994, he went to Johannesburg as Special Correspondent. He returned to Guwahati in 2002 and retired in the same year. Mr. Prabhakara currently lives in his hometown Kolar and continues to contribute articles, besides writing a blog in Kannada.
Three of his books in Kannada, a collection of short stories and two novels were published by Manohara Granthamala, Dharwad, under his pen name Kamaroopi. His works in Kannada are compiled as Samagra Kamaroopi.