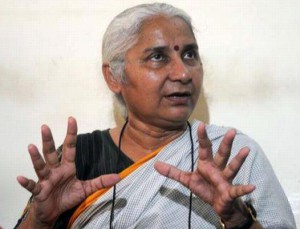 MUMBAI: Stating that the Aam Aadmi Party has reduced itself to a “tamasha”, veteran social activist Medha Patkar on Saturday resigned from the party as its internal turbulence reached a flashpoint with the ouster of founding members Prashant Bhushan and Yogendra Yadav from a key panel of the fledgling outfit.
“What happened at the AAP meeting in Delhi today is unfortunate,” Ms. Patkar told reporters in Mumbai after announcing she was leaving the party, which notched up an unprecedented victory in Delhi Assembly polls just last month.
“Political principles are being trampled upon in the party,” said the veteran activist, who has been a key figure in the Arvind Kejriwal-led outfit.“I condemn what happened with Prashant Bhushan and Yogendra Yadav,” Ms Patkar said, adding AAP has become a ’tamasha’.
Earlier in the day, Mr. Bhushan and Mr. Yadav were removed from AAP’s National Executive for anti-party activities, a decision slammed as “murder of democracy” by them.
Amid chaos and high drama, a resolution to remove the two dissident leaders along with their supporters Anand Kumar and Ajit Jha from the powerful panel was passed at a National Council meeting.