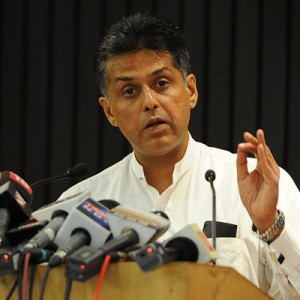 LHI: Senior Congress leader Manish Tewari on Saturday sparked a controversy after he raised a question on whether India was doing business with the Islamic State in Libya, following the release of two detained Indians.

The Islamic State terror group (IS) had allegedly kidnapped four Indian teachers in Libya who were returning to India from Tripoli on July 29, 2015. Of the four, two were released on Friday.
Commenting on their release, Manish Tewari wrote on Twitter,He further added, “Since Foreign Minister seems to hv direct “hotline” to IS or ISIS in Libya what happened to 57 people from Punjab Are they dead or alive FM?”
Condemning Tewari for his controversial tweet, the Bharatiya Janata Party (BJP) said this method of speaking with a forked tongue is normally seen in Pakistan.
“I am surprised when senior leaders of the Congress Party use this kind of language,” BJP spokesperson Nalin Kohli said. “At one side you are expressing happiness about the release of two Indians, and on the other side, you are raising questions over the government which secured the release,” he added.
Kohli further said, “It raises questions in one’s mind as to why the Congress Party feels unhappy or perturbed when the Government of India achieves something for Indian citizens; whether it was the rescue in Yemen, Libya and or a Christian priest from Afghanistan from the Taliban.
Now, these two people from Karnataka who have been released. Why does the Congress Party constantly want to run down the achievements of Government of India which is in favour of Indian citizens. For example, the Pradhan Mantri Jan Dhan Yojna, an insurance scheme.”
“The Congress party needs to make its stand clear. Otherwise, they will be seen as one who celebrates failure and their politics will only be built on the basis of being anti-development, anti-growth,” Kohli added.