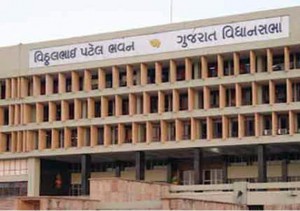 AHMEDABAD: In a move to protest the illegal availability of alcohol in Gujarat, despite the prohibition in the State, an elderly activist on Monday threw a liquor pouch in the Gujarat Assembly.He was held soon after.
Babu Shankar Patel, 70, a retired school principal, hurled a pouch of country liquor and a few pamphlets from the spectators’ gallery after the House paid homage to the martyrdom of freedom fighters Bhagat Singh, Sukhdev and Rajguru. He had managed to carry the pouch to the gallery hiding it inside his turban. The pamphlets urged the government to undertake strict implementation of the prohibition laws in the State.
The plastic pouch landed near the seat of Congress MLA Salish Parmar.Security personnel held Patel and removed him from the Assembly premises and detained for causing disruption.