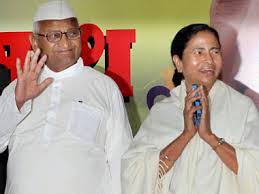 KOLKATA / NEW DELHI: As West Bengal Chief Minister Mamata Banerjee’s quest for a national pitch ended in `fiasco’ with Gandhian activist Anna Hazare giving Bengal leader a `Gandhian cut’ (Gandhi was known for giving his Congress dissidents), but party insiders both in Delhi and Bengal admitted today: “Anna’s mysterious illness and his absence only rubbed salt on the bleeding wound.’’
“But we do not consider Anna Hazare’s unexpected absence in the Ram Lila Ground a setback for our party. Of course, it’s for Mamata Banerjee to take a final decision, we were told that he was not well,’’ said party MP Sugoto Roy who was also in Delhi with Banerjee.
However, political observers said: Mamata had already left a strong message for Anna as she addressed the rally saying “I do not care who supports me and who doesn’t but I am confident that people would be with me as I am always with them…. And my struggle against Congress, BJP and CPI(M) will continue.’’
“I do not think it was any mild message for Anna either,’’ said a political commentator, agreeing with Mamata “that it was after all a failure of Anna to draw crowds and trying to pass the buck on TMC but this will not leave the voters convinced.’’
“Let’s not forget what later Anna’s aide Sunita Godhara later told media, “In spite of his illness, Anna would have come if he heard that about ten thousand people awaited his message….’’ So will that help Anna anyway?’’ he asked.
What however left Trinamool Congress leader and her people worried here has been `Anna-engineered absence’s side-effects on party’s Bengal pre-election prospects.
Though Mamata would carry her through in Bengal with collapsing CPI(M) and drying up Third Front and collapsing Congress, “but nationally Anna played out a bad trick with TMC leader,’’ felt not only party insiders here but many senior state Congress leaders while Left camp declined comments!