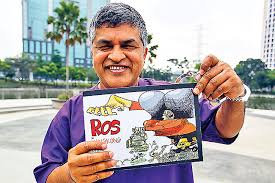 KUALA LUMPUR: A Malaysian cartoonist known for lampooning the ruling coalition has been charged with a record nine counts of sedition over a series of tweets criticising the country’s judiciary.

Lawyer Latheefa Koya said the charges on Friday against Zulkiflee Anwar Alhaque, better known as Zunar, are excessive and are aimed at silencing government critics. Ms. Koya Zunar faces up to 43 years in jail if found guilty on all nine charges.
The nine tweets criticising the judiciary were posted on February 10 when opposition leader Anwar Ibrahim began serving a five-year prison sentence after losing his final appeal on a sodomy charge.
A defiant Zunar posted a new cartoon on Twitter after his release on bail, vowing to “draw until the last drop of ink.”