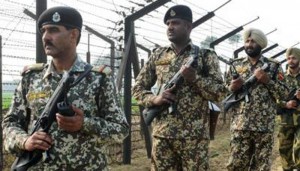 JAMMU: At least five civilians have been killed and 29 injured in worst shelling from the Pakistani side of the India-Pakistan border in Jammu district, said report on Monday.
According to police sources, the latest ceasefire violations by Pakistani Rangers came on a day when Muslims in both India and Pakistan are celebrating the holy Eid-ul-Azha festival.The police sources further said that Pakistan Rangers resorted to indiscriminate firing on forward villages and posts in Arnia sub-sector of the international border in Jammu district during the night, causing death of five civilians and injuring 25 others.
“The number of civilians killed in Pakistani firing in Arnia has gone up to five as one more person has succumbed to his injuries while being shifted to a hospital,” a senior police officer said.
“So far, 29 people, most of them civilians, have been injured in the ceasefire violation by Pakistan. The firing is still going on. The Pakistani Rangers are using mortars and automatic weapons in the attack,” he said.”The injured people, most of them civilians, have been rushed to hospital for treatment. Emergency relief teams have been rushed to the area.”
Reports from the area said shelling from the Pakistani side has been so heavy that mortar shells have fallen inside the Arnia bus stand which is more than four km away from the international border.
Panic gripped the border villages in Arnia and other places close to the international border in the district. According to a source, residents of many villages in Arnia have started migrating to safer places.Officials of civil and police administration have rushed to ensure that damage to the civilian life and property is minimised.
This is the 11th time Pakistani troops have violated the ceasefire since October 1. There have been seven ceasefire violations along the Line of Control (LoC) in Poonch and three along the IB in Jammu.
Meanwhile, Home Minister Rajnath Singh has warned Pakistan to immediately stop shelling along the LoC. “Pakistan must immediately stop ceasefire violations,” Singh told reporters.