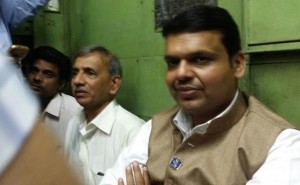 MUMBAI: Maharashtra Chief Minister Devendra Fadnavis on Monday traveled by a suburban train in Mumbai and interacted with fellow commuters.
He boarded the 6.29 pm Kalyan fast local from Chhattrapati Shivaji Terminus after attending a function at Colaba in South Mumbai.Officials traveling with Mr Fadnavis said he decided to take the mode of transport to reach Kalyan to attend an event.
Commuters in the first class compartment were taken by surprise to see the Chief Minister in their midst during the peak hours. They discussed overcrowding in trains and safety issues.
Some enthusiastic commuters even dialed their relatives and asked Mr Fadnavis to speak to them on phone, to which the Chief Minister responded positively.
“The interaction was about railway safety and crowd. Fadnavis responded positively saying that he would take up the issues with concerned authorities,” an official traveling with the Chief Minister said.