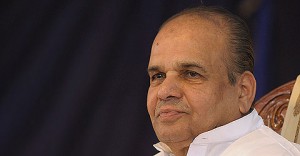 NEW DELHI : Maharashtra Governor K Sankaranarayanan, who had been transferred to Mizoram for his remaining tenure, resigned on Sunday saying that it was not possible for him to go to a new state. He said that he would ‘return to active politics’.  “I sent my resignation to the President today. I want to send my good wishes to Maharashtrians,” he said   “I resigned because I don’t want to continue as a governor. It is not possible for me to go to Mizoram.” Sankaranarayanan was among the first batch of governors telephoned by Home Secretary Anil Goswami to put in their papers after change of government at the Centre.
Asked whether the move is part of political vendetta, he said, “That is up to you people to comment about it. Our press people are so shrewd, so capable, so intelligent.”He said “My tongue will have another two inches from tomorrow. I am a free citizen,” he said, adding that he had sent his resignation to President Pranab Mukherjee. (As Modi Government Tries to Force Exits, Governors Push Back) When queried about why he resigned, he said, “It is not right for me to reveal reasons behind my resignation, because my feeling is that I have to honour the Constitution”.
“As the Governor, I wasn’t involved in politics. From today, I will definitely be involved in active politics,” he said. Mr Sankaranarayanan was among the dozen governors, appointed by the UPA, who were earlier asked to resign by Prime Minister Narendra Modi’s government.
Some governors had given in to the pressure and resigned, while others, including Mr Sankaranarayanan, had dug in their heels and refused to do so. (A Governor Says He’s Not Hurt by Call to Quit. But He’s Not Complying Either) Mr Sankaranarayanan had told media personnel in mid-July that he had received two calls from Home Secretary Anil Goswami, asking him to resign, but he had refused to do so.
“The Governor’s post is a constitutional post. He is a representative of the President; he is appointed by the President. If an appropriate decision making authority asks me (to quit), I will definitely think over it,” he had said. A communique issued well past Saturday midnight by the Rashtrapati Bhavan stated that the 82-year-old governor had been transferred to Mizoram for the remainder of his term, which ends in 2017. Gujarat Governor Om Prakash Kohli has been asked to discharge his duties, it added. The Congress and other Opposition parties have pointed out that in 2010, the Supreme Court had ruled that Governors cannot be removed just because a new government takes charge. Story First Published: August 24, 2014 17:25 IST