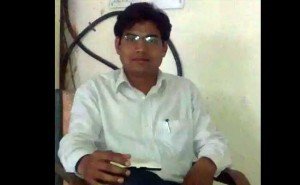 NEWThe BJP government in Madhya Pradesh has rejected the Congress’ demanded for a CBI investigation into the death of at least 25 people allegedly linked to what is called the Vyapam or Madhya Pradesh Professional Examination Board scam.
Here are the latest developments in the story:”The deaths of people linked to the Vyapam scam are natural…there is no foul play behind it as alleged by the Congress,” Madhya Pradesh Home Minister Babulal Gaur told NDTV today, adding, “There is no need of a CBI probe, even the Supreme Court turned down that plea of the Congress.Dr Tomar died after complaining of a pain in the chest on Saturday night.
His family says he was well hours before and has alleged foul play. A post mortem report is expected today.Former Union minister Jyotiraditya Scindia of the Congress tweeted this morning, “Another accused of #VyapamScam found dead under mysterious conditions. Independent probe should investigate the deaths linked with the scam.
“The Opposition alleges that more than 40 people allegedly linked to the case have died in the last five years, and has targeted Madhya Pradesh chief minister Shivraj Singh Chouhan and his wife, demanding the chief minister’s resignation.Congress leader Digvijaya Singh said,” More than 41 people who were accused have died mysteriously; Shivraj Singh Chouhan is trying to cover up.
The PM should speak about it.Mr Chouhan has said that it is his government that exposed massive corruption in Vyapam or the Madhya Pradesh Professional Examination Board (MPPEB), which conducts examinations for recruitment to various government posts and for admission to professional courses.About 3000 people have been named in the massive allegations of corruption in the board’s conduct of examinations; about 1800 to 1900 people are in jail, including politicians.
Nearly 500 people are said to be absconding. Investigations began in 2012.Dr Tomar, the vet who died on Saturday, had been in jail since February this year. He was accused of arranging for imposters to write pre-medical examinations in place of actual candidates in 2009.The Madhya Pradesh High Court  has sought report on the deaths from a Special Investigation Team or SIT which is monitoring the investigation being done by a special task force of the state police. A Chargesheet in the case is expected to be filed on July 15.