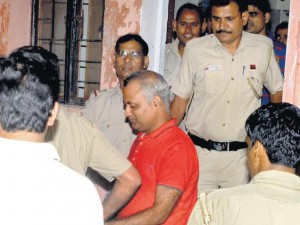 NEW DELHI: Delhi’s former law minister Somnath Bharti was formally arrested around 4 a.m. on Tuesday, hours after he surrendered at Dwarka (North) police station on Monday night
Mr. Bharti had been evading arrest for almost a week before. surrendering upon the Supreme Court’s directions in a case of domestic violence and attempt to murder filed by his estranged wife Lipika Mitra.
Sources in the police have said that they would seek police custody of Mr. Bharti as he was not cooperating with the investigators who put forward a series of questions to him since his surrender.
He had surrendered at Dwarka (North) police station where the case against him was registered, but was taken to Dwarka (South) police station which has provisions for custody.
Mr. Bharti, on his part, has claimed that he was not running away from the law and was only availing legal remedies.