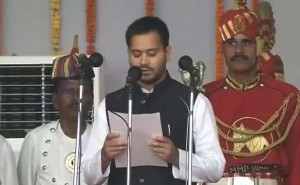 PATNA:  Young Tejaswi Pratap Yadav will be Bihar’s new Deputy Chief Minister. He took oath immediately after Chief Minister Nitish Kumar on Friday afternoon at a grand ceremony at Patna’s Gandhi Maidan.
Tejaswi Prasad Yadav won his first election on the day he turned 26, two weeks ago. What qualifies the political rookie, who has only finished class 9, for the Deputy Chief Minister’s post is his last name.
Tejaswi is the son and political heir of Lalu Prasad Yadav, who made a triumphant political comeback in this year’s Bihar election with his Rashtriya Janata Dal or RJD winning 80 of the state’s 243 seats. More than the 71 that partner Janata Dal (United) of Nitish Kumar got.
Tejaswi’s older brother Tej Pratap, who turns 28 tomorrow, will also be a minister in the new Nitish Kumar government. He was the third person to be sworn in today and had to repeat a portion of his oath when Governor Ram Nath Kovind pointed out a mispronunciation. It was Tej Pratap’s first such ceremony – he too is a first-time lawmaker.
But the spotlight is on Tejaswi who, sources in the RJD say, is the more politically astute.
Lalu Yadav, who cannot contest elections or hold public office after being convicted in a corruption case, is said to have pushed for the deputy chief minister’s post for his son. Years earlier, he had installed his wife Rabri Devi, a complete political novice, as the chief minister of Bihar.
If Tejaswi, a former cricketer who played in the Indian Premier League, becomes deputy chief minister today, he will have to play on a far more complex pitch.
And will have to fill big shoes. The last man to hold the post of Nitish Kumar’s deputy was the seasoned Bharatiya Janata Party leader Sushil Modi, known to be a good administrator. Two years ago, Mr Kumar dumped the BJP, an ally for 17 years.
Tejaswi studied till class 9 in the capital’s Delhi Public School, Mathura Road. His election affidavit says he has moveable assets of over one crore and does not own a car.