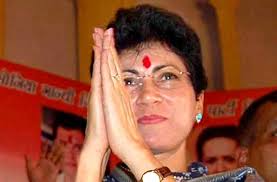 NEW DELHI : Lok Sabha MP Kumari Selja may quit the Union Cabinet, according to Congress sources. Going by the sources, Selja is expected to work for the party ahead of the crucial Lok Sabha elections.
She currently holds the Ministry of Social Justice and Empowerment.
Earlier in the day, Congress had also named Selja for the Rajya Sabha from Haryana. Selja is a Lok Sabha member from Ambala in Haryana.
Selja is second woman minister to have quit the Union Council of Ministers in the recent past after Jayanthi Natarajan.
A number of Union Ministers are likely to put in their papers in coming days to involve them in party work ahead of the Lok Sabha polls scheduled in April.