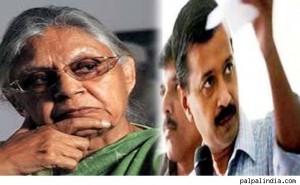 NEW DELHI : Aravind Kejriwal,s government has ordered for an FIR or First Information Report to be filed against former chief minister Sheila Dikshit for her alleged role in a scam linked to the 2010 Commonwealth Games in Delhi, sources say.
Soon after taking power in December, Mr Kejriwal had vowed to expose corruption cases against his predecessor, which was one of his promises before the Delhi election. He reportedly today directed the anti-corruption bureau to register an FIR and investigate Ms Dikshit’s alleged role in the purchase of imported street-lighting at inflated prices.
On February 3, the Aam Aadmi Party government had written to the President of India seeking an investigation into the manner in which the three-time Congress chief minister authorized illegal colonies in 2008.
“We will ensure thorough investigation of all cases of corruption in CWG projects,” said Law Minister Somnath Bharti.
Reports of the streetlighting scam surfaced in the investigations carried out by the national auditor, the Comptroller and Auditor General (CAG), and the Shunglu Committee that investigated the expenses for the event. Ms Dikshit was blamed for forcing a loss of Rs. 31 crore to the exchequer by deciding to use imported equipment for lighting up the streets of Delhi before the Games. The lights were allegedly bought at a rate much above the prevailing market price.

The government’s auditor found  that lights were bought after the Chief Minister’s intervention at a price that ranged from Rs. 25,000 to 32,000 each – “far higher than the fair price computed.”

The CAG also stumbled into bungling into the purchase of streetlights from Saudi Arabia at inflated prices by a company called Space Age. The firm had first been blacklisted, but was allegedly cleared on Ms Dikshit’s instruction.

The Shunglu Committee, appointed by the Prime Minister to study the finances involved in the Games, had also referred to the alleged intervention by the then Chief Minister to allow Space Age to supply street lights.