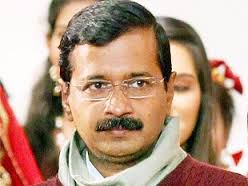 NEW DELHI: Former Delhi chief minister Arvind Kejriwal spent a sleepless on Wednesday night in the Tihar Jail, struggling with mosquitoes’ buzz and bite and warm air in the cell, said Tihar sources.
A Tihar official told reporter that Kejriwal was seen turning on his sides on a mat inside the 16-by-10 feet separate cell of ward number 14 in jail number 4. ”As there is only one fan inside Kejriwal’s cell, he was seen changing sides on his mat and bedding due to warm weather. Mosquito bites also left the AAP leader some sleepless hours till late night,” the Tihar official, speaking on condition of anonymity, told reporter.
Kejriwal has been lodged in the same jail where anti-corruption crusader Anna Hazare was lodged in 2011 and accommodated adjacent to the ward of former Bahujan Samaj Party MP Dhananjay Singh, who is accused in the torture and murder of his maid. Kejriwal reached the jail around 6.30 p.m. Wednesday, ate bread, ‘dal’ and ‘khichdi’, a mixture of pulse and rice, for dinner.
The officer said he woke up around 5.30 a.m. and took breakfast after meditation. ”Like any other prisoner, Kejriwal also slept on a mat provided by the jail authorities. This is the norm for all prisoners in the jail, expect for the ones who are above 60 years old. He was also provided a blanket and two bedsheets,” Tihar Jail spokesperson Sunil Gupta told reporter.

“The bedding taken by Kejriwal’s wife was also allowed inside the jail. She also got diabetic medicines which were handed over to him as per court’s direction,” said Gupta. Gupta said that he was not given any special privilege.

“Kejriwal’s wife along with AAP leaders Sanjay Singh and Ashutosh today (Thursday) met him inside the jail around 10 a.m. They talked to him for over 20 minutes,” said Gupta. Kejriwal was sent to two-day judicial custody by a Delhi court Wednesday following his refusal to furnish a personal bail bond of Rs.10,000 in a defamation case filed by Bharatiya Janata Party leader Nitin Gadkari.

Metropolitan Magistrate Gomati Manocha sent Kejriwal to judicial custody and fixed Friday as the next date of hearing when he refused to furnish the bail bond. Kejriwal was summoned by the court for the defamation case slapped by former BJP president for calling him a “corrupt” person.