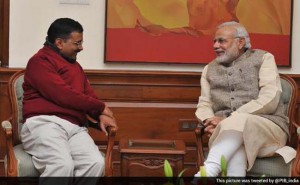 NEW DELHI: Ahead of his first working day as Delhi Chief Minister, Arvind Kejriwal tweeted today that he is feeling better after fighting a fever for a few days which included his huge oath-taking ceremony on Saturday at a public park in Delhi.

Mr Kejriwal, 46, leads a cabinet of six ministers and has decided not to manage any ministry directly, appointing deputy Manish Sisodia to handle as many as six portfolios including Finance.
Sources say that Mr Kejriwal plans to assimilate experts in different areas in his office, which will function as the nerve-centre of his government. That plan resembles the structure created by Prime Minister Narendra Modi for his office.
In an earlier move that seemed to emulate Mr Modi’s style of governance, Mr Kejriwal has asked top bureaucrats from different ministries to present their roadmaps to him on Thursday.
Mr Kejriwal’s cabinet includes no women.
Sources in his Aam Aadmi Party or AAP said that women leaders are likely to be inducted as advisors in the Chief Minister’s Office which will expend hefty political capital on figuring out how to implement the 70-point agenda outlined by AAP in the campaign for the election which is swept in record numbers earlier this month.