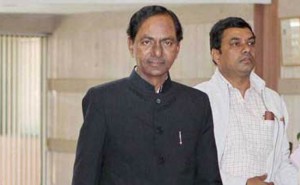 HYDERABAD:Telangana’s ruling TRS has swept the civic polls in Hyderabad, virtually wiping out the Telugu Desam Party-BJP alliance and the Congress.
Till late Friday, results had been declared for 135 of the 150 seats in the Greater Hyderabad Municipal Corporation which went to polls on Tuesday. The TRS or Telangana Rashtra Samiti of Chief Minister K Chandrasekhara Rao has won 98 and is easily expected to cross a two-thirds majority.
The Congress, which won the previous election, has won only one seat so far. Asaduddin Owaisi’s All India Majlis-e-Ittehadul Muslimeen (AIMIM) has won 32.This is the first major civic election in the I-T city after a separate Telangana state was carved out of Andhra Pradesh in June, 2014.
The Chief Ministers of both states fought hard to win the battle for Hyderabad, which will remain the shared capital till 2024.While the TRS, which didn’t contest the 2009 polls, is heading for a landslide, rival Telugu Desam Party (TDP) of Andhra Pradesh Chief Minister Chandrababu Naidu, which tied up with the BJP, has won just 1 seat. The BJP has won three seats so far.
The sons of the two chief ministers, KT Rama Rao and Lokesh Naidu, took the rivalry up several notches and even sparred on social media in the days before the polls.
Chandrasekhar Rao or KCR didn’t wait for the election or the results to announce a reward for his son, who is a minister in Telangana; he announced that KTR will be given additional charge of municipal administration and urban development.
During the high-voltage campaign, the TRS rubbished Chandrababu Naidu’s claim that he is responsible for “Brand Hyderabad”.KCR taunted Mr Naidu saying that as the chief minister of Andhra Pradesh, he should worry about sweeping the streets of his new capital Amaravati and not Hyderabad.
As votes were being counted, a re-poll was held in a part of the city, Puranapull, after complaints of rigging and violence.