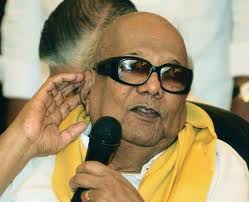 CHENNAI : Spelling out riders for prospective allies including DMDK ahead of Lok Sabha polls, DMK patriarch M Karunanidhi tonight said parties that support the stalled Sethu Samudram Project and oppose communalism were welcome to join its alliance.
Addressing the party’s tenth state-level conference, Mr Karunanidhi said the present alliance of his party with the Indian Union Muslim League, Viduthalai Chiruthaigal Katchi and Manithenya Makkal Katchi, who were “committed” to secularism and social justice, could be expanded to a bigger coalition with parties that accept the Sethu Samudram Project.
Accusing Chief Minister J Jayalalithaa yet again of stalling the Sethu Samudram Project as it was “initiated by the DMK regime,” he wondered how her party which was named after Anna could oppose the late leader’s dream project.
Sethu Samudram project is aimed at constructing a shorter navigational route around India’s southern tip by breaching the mythological Rama Sethu, believed to have been built by Lord Rama to reach Ravana’s kingdom, Lanka.
The project has been put on hold after the Tamil Nadu government pleaded with the Supreme Court that the project be scrapped as it would adversely affect marine biodiversity and asked the Centre to declare Rama Sethu a national monument.
Stating that several projects started during his regime including the equitable education plan were put on hold after Ms Jayalalithaa assumed office, he said the education plan was resumed only after the intervention of courts.
Accusing Ms Jayalalithaa of adopting double standards in the Cauvery water dispute, he alleged that she was “dragging the case” related to disproportionate assets against her in a Bangalore court.
The DMK chief also launched his party’s website in presence of a huge number of supporters.