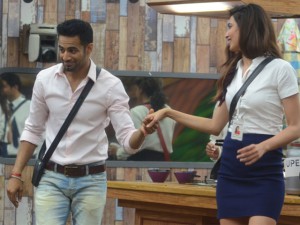 MUMBAI: Actress Karishma Tanna says her much-talked about romance with actor and fellow contestant Upen Patel on reality show Bigg Boss was not fake, contrary to what other contestants said.
Karishma earlier said on the show that she was committed to a businessman and would marry him once the show ended. The actress raised eyebrows when she showed affection towards Upen without formally ending her relationship with her boyfriend.
“My feelings for Upen were real. I am not a person to compromise on my priorities and family just for a show. I was true to him and to my feelings. I will never create a romantic angle to survive on a game show.
“We, however, haven’t decided about the future. I have not thought about it right now. Let’s see where it goes,” Karishma told PTI after she was announced as the runner-up of Bigg Boss Halla Bol.Her arch-rival on the show, actor Gautam Gulati was crowned the winner and the 31-year-old actress said she was happy the two finished the season together.
“We started out as enemies but later on became cordial because the show has such a format that you keep breaking up and then patching up. We stopped getting into each others’ matters. Competition and rivalry was there in the tasks but otherwise we were fine with each other. We began together and ended together so I am happy about that,” she said.
Karishma, who was one of the most controversial contestants on the show, said she changed as a person after her four-month-long in the house.”My journey had a lot of ups and downs but I think my decision to take up this show was right. The show taught me a lot of things, especially how to be less stubborn. I have come out as a better person,” she said.
The actress said she regretted applying chilli paste on her co-contestants’ face during a task, which got her backlash from the audience. Known to be aggressive in the tasks, Karishma said she could have toned down on various occasions.
“If there is any regret in my four-month journey, then it is using chilli paste. I don’t think I should have done that. I have realised I need to tone down and be easy at times. It is good to be competitive and have a fighting spirit but one should not go to extremes,” she said.
Karishma looks forward to going on a much-deserved vacation with her family.”I am happy I will be with people, who would not judge me. I can’t wait to be with my folks,” Karishma said, adding that she planned do films and reality TV after the break.