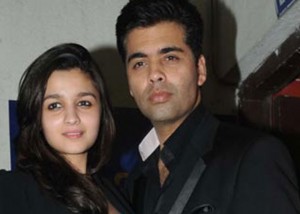 MUMBAI: Alia Bhatt is taking big leaps in Bollywood, as her mentor Karan Johar ensures guiding her during her endeavours.
In fact, Alia’s bonding is such with Karan Johar that whenever she is in need of some genuine reasonable and reliable advice or counselling, be it regarding her personal or professional life, she looks up to her mentor Karan Johar to show her the way.

Karan Johar jokingly comments on this, “Alia’s problems are never tiny, they are always large. Tiny Alia calls me for many of her large problems,” reports a daily.
Talking about her chemistry with Karan Johar, Alia said, Working with Karan is amazing, just being around him is amazing. Because we have such an amazing relationship,​​​ which just comes across whether we’re in front of the camera or behind the camera. So we just are ourselves”.
Karan adds further, “Alia is like a child, she’s like my child. ​She’s not only somebody I launched in cinema, but I feel deeply connected to. So I think we have a general kind of chemistry that I think even lovers may not have. We have a lot of mutual love and that love kindof transfers itself automatically whether you put the camera on or whether you leave it off.”