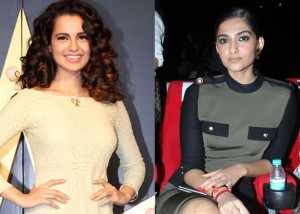 MUMBAI: It seems Kangana Ranaut is nursing no grudges against Sonam Kapoor as she has called the Khoobsurat star among the best dressed heroines in Bollywood.It is believed that Sonam took pot shots at Kangana, 27, when she said on a chat show that bad looking people are considered good actors in Bollywood, probably hinting at Kangana’s performances in Queen and Revolver Rani.
Quizzed about the best dressed actresses in the Hindi Film industry, Kangana said, “These days everyone dresses really well. Jacqueline is very well dressed and so is Sonam Kapoor. Even Deepika Padukone dresses well.” Kangana was in the city to walk the ramp for designer Anju Modi on the day two of the ongoing India Couture Week. Anju made a mark in Bollywood with her traditional outfits in Sanjay Leela Bhansali’s Ram-Leela. She has again teamed up with the director for his next film Bajirao Mastani that again stars Deepika and Ranveer Singh in the lead.
“Anjuji is changing the face of fashion in Bollywood. Our industry tends to get inspired or impressed by the western fashion. It is nice for a designer like Anjuji who works with our culture and traditions,” Kangana said. She may have won a National award for playing a supermodel in Fashion but Kangana looked nervous as she took to the runway. She once again tripped but covered the slight goof-up with an affectionate smile.
The actress, who returned from New York recently, said she finds it uneasy to deal with paparazzi in India.
“I am just back from New York. It was like going back to school. This is my first public outing after coming back from New York. So I took it in a very easy way but it was not. Coming back to paparazzi was intimidating. I couldn’t believe I was back here,” she said. Kangana looked beautiful in a heavily embroidered black skirt teamed with full sleeved top especially curated by the designer for her.
Anju’s collection, titled Manikarnika, was an exploration of age-old craft and ancient techniques. The embroideries were derived from the architecture, with the paintings of the Ajanta-Ellora caves serving as a major inspiration.Models sashayed down the ramp in dhoti teamed with long jacket and kurtas. Even sarees were worn as dhotis.