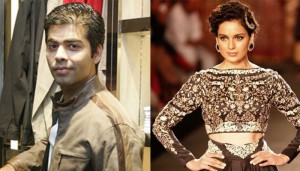 NEW DELHI : There is place for everyone in Bollywood, they say. Quite right! The latest news coming from Tinseltown is about our ‘Queen’ Kangana Ranaut. Indeed, the actress proved that she can act and has evolved in her craft.
According to a leading daily, the latest celebrity to be going gaga over Kangy baby is none other than ace filmmaker Karan Johar. Kangy, who was the showstopper for KJo’s clothing line, which hit the ramp sometime back, was showered with good words from by the director. It has been reported that Karan was so impressed with the actress that he kept praising her.
Interestingly, with Kangana hitting the bull’s eye this year with ‘Queen’, she will also be seen in KJo’s production venture ‘Ungli’. This will be the first Dharma film for the super talented actress. With KJo complimenting her big time, we are sure the two are going to be seen collaborating on many projects in the near future.