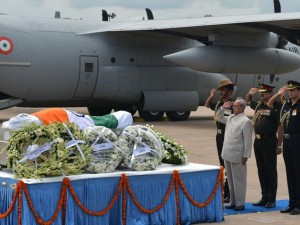 RAMESHWARAM: The mortal remains of former President A. P. J. Abdul Kalam, would be laid to rest on Thursday morning in Rameswaram, district Collector K. Nanthakumar said.
In a brief interaction with reporters here on Tuesday, he said the body would be brought here from Delhi on Wednesday afternoon and the funeral would take place around 10: 30 am on Thursday.

After the arrival in the afternoon, the body would be taken to “House of Kalam”, the ancestral house of the former President . Later, the body would be kept in the open ground in front of the bus stand for the public to pay homage, the Collector said.
The district administration has selected three places for the funeral and would finalise a place after consulting A. P. J. M. Maraikayar, elder brother of Mr. Kalam and other family members, official sources said.
Three places – a government land at Meyyampuli, near Thangachimadam; a forest land at Natarajapuram near Danushkodi; and a private land of Abil Kabil Dargah have been shortlisted, the sources said.
Modi likely to be present at funeral
Prime Minister Narendra Modi is likely to take part in the funeral ceremony. The district police have been alerted about the likely visit of Mr Modi on Wednesday, sources here said. The Prime Minister is likely to make a flying visit to the island here and leave after taking part in the funeral, the sources said.
The authorities have sent a list of liaison officers and security personnel who would be visiting the island to make security and other logistic arrangements for the Prime Minister’s visit.
A tentative programme has been sent, but it has no timings, the sources said. Tamil Nadu Chief Minister Jayalalithaa is also expected to take part in the funeral, but nothing has been confirmed, sources said.
The police have made available two helipads one at INS Parundu, the Indian Naval air Station at Uchipulli and the helipad at Pamban to receive the body of Kalam. The VIPs would also land in one of the two helipads.
Kerala Governor and Chief Ministers of Kerala and Andhra Pradesh have confirmed their arrival to take part in the funeral, the sources said. Superintendent of Police N M Mylvahanan said about 1,000 police personnel would be deployed on security for the funeral ceremony.
Schoolchildren pay tributes
Schoolchildren from Mandapam Panchayat union middle school took out a candle light procession and paid homage to the ‘alma mater’, Abdul Kalam.
The children’s candle light procession was the cynosure of all eyes as hundreds of people from various walks of life made a beeline to mosque street to pay their homage to the portrait of Kalam kept at the entrance of “House of Kalam”.
Kalam had studied up to second form in the Mandapam panchayat union school before moving to Schwartz high school in Ramanathapuram to join third form on June 13, 1946. He passed out sixth form and left the school on June 15, 1950, school sources said.
Earlier, Collector K Nanthakumar and Superintendent of Police N M Mylvahanan led hundreds of people of the district and neighbouring districts in paying homage to Mr Kalam at his residence. Most of the shops in the island downed shutters as a mark of respect for the son of the soil. Van drivers who operated shuttle services to Danushkodi also took off on Tuesday to pay their respect to the former President.
Amid confusion in declaring holiday to educational institutions, most of the private schools declared holiday and the students took out candle light procession to the House of Kalam and paid floral tributes to the portrait kept in front of the House of Kalam.