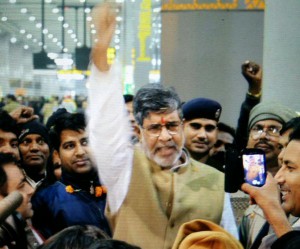 NEW DELHI : Having made India proud by being felicitated with the prestigious Nobel Peace Prize honour in Norway’s Oslo, the messiah of thousands of innocent smiles, Kailash Satyarthi on Sunday returned home and said that the child labour should be buried into pages of history.
In a show of respect and patriotism for motherland, the Nobel laureate bowed down to touch the Indian soil just after having landed at the airport.
Kailash arrived at the airport to be greeted by “heartfelt” warm welcome by countrymen who had thronged to catch a glimpse of the Nobel laureate.Later, Kailash also visited Rajghat with  his wife Sumedha and paid homage to Mahatma Gandhi.He said that while receiving the award he was remembering Gandhiji every moment and he could clearly visualise  Bapu walking towards the stage to receive the Nobel, the PTI reported.
Reiterating what he had said in his acceptance speech after receiving the Nobel, Satyarthi called for an effort to globalise compassion as a mass movement just like Mahatma Gandhi had made peace and non-violence into a mass movement, the report added.
Referring to the Child Labour (Prohibition and Regulation) Amendment (CLPRA) Bill,  the Nobel laureate also made an appeal to “the Parliamentarians, and also to other leaders to facilitate the passage of the key legislation failing which history and children of India won’t forgive them,” the PTI quoted him as saying.
On being asked about the prize money, Kailash said that he had “never seen” or touched that much amount of money ever in his live and added that he will use “every single penny” for the cause of children in India and globally, the report added.Kailash shared the Nobel prize money worth USD 1.1 million with Pakistan’s Malala Yousufzai.
In a tweet, Kailash, said how he ran short of words to express his feelings having returned to his nation after receiving one of the most revered awards.Expressing his delight on having returned to his beloved country, Kailash tweeted a “Bharatmata ki jai” also mentioned how fellow Indians had welcomed him.
Kailash, 60, was on December 10 honoured with Nobel Peace Prize along with Malala Yousufzai for his struggle against repression of child rights.In his acceptance speech, Kailash said that he earnestly believed that child labour can be eliminated within his lifetime. He also said how the world will never be free unless all children were freed from shackles of child labour, trafficking, etc.
“With a warm heart I recall how thousands of times, I have been liberated, each time I have freed a child from slavery,” Kailash said.Having stressed on the significance to liberate children from quagmires of oppression and slavery, Kailash concluded his Nobel lecture with a call for “march from darkness to light”.
Ahead of receiving the Nobel, Kailash spoke exclusively to Zee News, and dedicated the Nobel Peace Prize to all the underprivileged children and also to all the Indians.The Nobel laureate added that the award was the most special of all – 11 awards – he has received so far as it honours all those children who are suffering and mired in child labour or trafficking.
Kailash, who is the eighth Indian to have been awarded the Nobel, has been honoured for his more than three decades of selfless service towards upholding children’s rights.Satyarthi’s “Bachpan Bachao Aandolan” has freed more than 80,000 children from the scourge of child labour, slavery and trafficking.