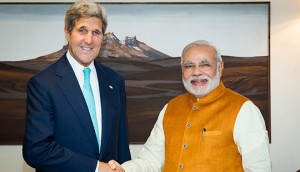 NEW DELHI : Visiting US Secretary of State John Kerry has arrived at 7, Race Course Road and is currently meeting Prime Minister Narendra Modi. The meeting comes a day after Kerry met External Affairs Minister Sushma Swaraj for the 5th India-US Strategic Dialogue. Notably, Kerry’s is the first high-level contact of the US government with the Modi government.

Kerry arrived here on Wednesday on a three-day visit to strike up the US’ first high-level engagement with the Modi government. On Thursday, the US reached out to the new Indian government of PM Modi promising to partner it in its vision of “Sabka saath, sabka vikas or development for all”, even as India raised the issue of America’s cyber snooping and termed it unacceptable between friends.
Kerry said that Modi’s vision is similar to that expressed by US President Barack Obama and that the US private sector is eager to be a catalyst to the India growth story. The meeting between Kerry and Sushma Swaraj also laid the groundwork for the summit meeting between Obama and Modi in Washington in September.
Addressing a joint press briefing after their over three-hour long talks, Sushma Swaraj said that she had raised the issue of the US cyber snooping and conveyed to Kerry that the people of India were very agitated over the US surveillance activities.
“I also said if we consider each other friends then a friendly country spying on another is unacceptable.” Kerry, in reply, said that the US “fully respects and understands the feelings expressed” by the minister and that the US would continue to work with India wherever they saw a threat to their shared interests.