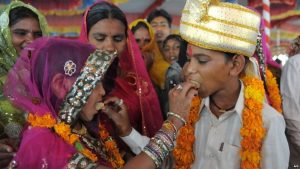 I/RANCHI Jharkhand, West Bengal top in worst state list in terms of child marriages: MHA. Around 54.9% of girls are married in West Bengal before attaining the age of 21 years, the figure for Jharkhand is 54.6% as against the national average of 29.5%, said the survey.
“The percentage of females who got effectively married before reaching 18 years of age is 1.9 at the national level and varies from 0.0 in Kerala to 5.8 in Jharkhand,” the survey said. In Jharkhand, child marriages accounted for 7.3 per cent of marriages in rural areas and three per cent in urban areas, it said.