RANCHI :Four of Jharkhand’s 14 Lok Sabha seats go to polls Thursday in the face of the Maoist call to boycott the election.Voting takes place in Koderma, Lohardagga, Palamau and Chatra constituencies 10 April.  ”As many as 1,193 video cameras will record the polling. Webcasting will done at 271 booths and 1,189 still cameras have also been pressed into service,” said an election official to reporter. 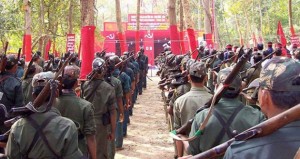 A total of 5,647,736 voters are eligible to cast their votes. Six helicopters will be pressed into service, of which two will be for air surveillance. The votes will be cast at 7,058 booths, of which 2,134 are categorised as sensitive booths.Maoist guerrillas have put up posters in remote villages of Lohardagga, Palamau, Gumla and other districts and have given teh call for the poll boycott. Around 40,000 security personnel comprising both of the state police and para-military forces have been deployed.
In the first phase, the key candidates is former state police director-general V.D. Ram, who is fighting on a BJP ticket from Palamau. He is locked in a triangular fight with sitting MP, former Maoist leader and TMC candidate Kameshwar Baitha, and Manoj Bhuiya of the Rashtriya Janata Dal.From Koderma, BJP state president Rabindra Rai is fighting and he is also locked in a triangular fight, as is the Lohardagga seat among the BJP, Congress and the TMC.
The BJP has fielded sitting MP Sudarsan Bhagat, TMC has named its legislator Chamra Linda and the Congress has pitted former Indian Police Service officer and former central Minister Rameshwar Oraon.
In 2009, the BJP won two of the four seats, while one went gone to the Jharkhand Mukti Morcha and the fourth, of Chatra, was bagged by an Independent candidate.