CHENNAI: In her sharpest attack yet on the BJP and its prime ministerial candidate Narendra Modi, AIADMK chief on Thursday questioned the Gujarat model of development, calling it a myth.According to reports, Jayalalithaa said in comparison to Gujarat her state Tamil Nadu was much more developed.
A myth has been created about Gujarat which is not true, the Tamil Nadu chief minister said, adding it is only marketing.Jayalalithaa, who shares a good personal rapport with Modi, had till the start of last week avoided speaking against the Gujarat CM. 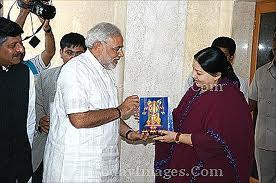 However, her stance against the BJP’s PM nominee has changed since her rally on Sunday when she slammed the BJP for “betrayal” on Cauvery water sharing issue In response, Modi accused her and the DMK of being perpetually engaged in decimating each other, ignoring people’s welfare.On Tuesday too, the AIADMK had hit out at Modi and his Gujarat model of development,
The party said in its mouthpiece ‘Dr Namathu MGR’ that Tamil Nadu was far ahead of Gujarat in several indices, including attracting investments, adding Modi’s “gimmicks” would not work in the state
.