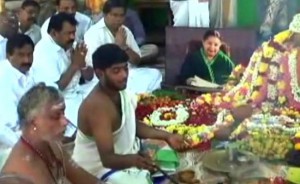 CHENNAI: A Bangalore court is expected to decide tomorrow whether Tamil Nadu Chief Minister J Jayalalithaa has accumulated assets disproportionate to her known sources of income. The verdict will have a massive impact on politics in her state.
If convicted, Ms Jayalalithaa will have to step down and appoint someone in her stead. A verdict in her favour will cement her position further in Tamil Nadu, where assembly elections are due in 2016. Related Jayalalithaa’s Expanding Amma Brand Now Offers Cement At the Heart of Disproportionate Assets Case Against Jayalalithaa, 28 kgs Gold, 12,000 Sarees, Land Partymen Pray For Jayalalithaa as D-Day in Assets Case Nears Ms Jayalalithaa followed up her emphatic 2011 victory in the assembly elections with a near sweep of her state in the national elections four months ago – her party won 36 of the 39 seats.

Workers of her party the AIADMK are offering elaborate prayers in hope of a verdict in her favour. Opposition parties are sitting on the edge of their seats. Ms Jayalalithaa has appeared unruffled, announcing a scheme to provide subsidised cement to the poor today. The case is 18 years old; it was initiated by Ms Jayalalithaa’s arch rival the DMK after her earlier term as chief minister between 1991 and 1996.
The prosecution alleges that Ms Jayalalithaa owned assets worth only Rs. 3 crore when she became the chief minister in 1991. While in office, she took a salary of one rupee. But, it alleges, during her five-year tenure, the assets of Ms Jayalalithaa and three others who lived with her, went dramatically up to Rs. 66.6 crore.
The case was shifted to a Bangalore court after Ms Jayalalithaa came back to power in 2001. Investigators have alleged that Ms Jayalalithaa, her foster son Sudhakaran whom she has since disowned, her friend Sasikala and Sasikala’s sister-in-law Ilavarasi, came to own between them, hundreds of acres of property, 28 kg of gold and 12,000 saris without any known business activities.

Ms Jayalalithaa says its a case of political vendetta. During the trial, she argued that the prosecution undervalued her earlier assets, ignored her income from other sources and has exaggerated the value of her property. AIADMK workers say they are confident that Ms Jayalalithaa, who has been acquitted in 11 other cases filed by the DMK, will “get justice” in this one too.