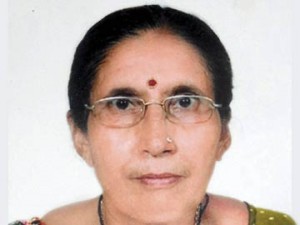 SANA:  She has been drawn in the political slugfest by Narendra Modi’s rivals to target him, but decades of separation from Gujarat Chief Minister has not embittered Jashodaben, who fasts and prays for her husband to become the Prime Minister.The reclusive 62-year-old retired school teacher has vowed not to eat rice and remain bare-footed till she sees her husband become the Prime Minister, says Jashodaben’s brother Kamlesh.
“Jashodaben wishes from her heart that from being a Chief Minister, he (Modi) rises to become the Prime Minister of the country. She prays for that,” he said.Jashodaben has now proceeded on a ‘char dhaam yatra’ to Badrinath, Kedarnath, Gangotri and Yamunotri for fulfillment of the wish, he added.Living in a small village Ishwarwada in Mehasana district of North Gujarat with her two brothers, Jashodaben, according to her family, is a devout person and leads a simple life.
“She wakes up early in the morning, prays and visits temple… after that she is busy with her daily routine. She also watches news and reads all newspaper reports about him,” Kamlesh said.
“Also, if someone speaks ill of him (Modi), she does not tolerate it. Otherwise, she is very mild-natured and never raises her voice against anybody,” he said.Eldest of our four siblings, Jashodaben got married to Mr Modi in 1968 aged barely 17 years.In an interview published in a Gujarati weekly magazine, Jashodaben had said their stay together was very brief.
Mr Modi, who soon after their marriage left his home to become a RSS pracharak, had inspired her to study further after which she pursued her Primary Teachers Training (PTC) course and got a job.The Gujarat Chief Minister’s elder brother Somabhai said on Thursday that Mr Modi’s marriage to Jashodaben had “turned out” to be a “social formality”.
“Our parents had not studied much and we were a poor family. To them, Narendra was like any other child. In such context, our parents conducted his marriage at a tender age with Jashodaben, but it turned out to be just a social formality for the sake of it,” Somabhai had said.