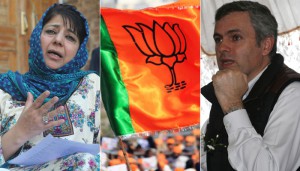 The BJP is going to the electorate with Modi’s slogan ‘Sab Ka Saath, Sab Ka Vikas’ and the promise to free the state from its dynasties. It remains to be seen if the Valley is impressed by his developmental agenda, especially after the Prime Minister chose to visit the border and flood affected areas on Diwali.
The other where the party hopes to make big gains is the Chenab Valley, which comprises of Kishtwar, Doda, and Ramban districts.
PDP
The PDP sees the upcoming polls as a real opportunity to occupy the central place in state’s politics, especially in the valley. Undoubtedly, the party enjoys people’s support, especially in South Kashmir.
With opinion polls predicting its emergence as the single largest party, the PDP is leaving nothing to chance this time. Party leaders have been strongly pitching the need to save the constitutional status of the state.
Importantly, the party is watching with trepidation the rise of BJP with party leaders saying that there is ‘Mufti wave’ and not ‘Modi wave’ in the state.
National Conference
Omar Abdullah is hopeful that the party would win based on the ‘good work’ done by his government in the last six years.  However, with many senior leaders like Mehboob Beg and Sheikh Ghulam Rasool deserting the National Conference, Abdullah’s options appear limited.
Also, Farooq Abdullah’s absence from the scene owing to health issues, has further dented NC’s chances.
Interestingly, amid reports that the NC has gone soft on the BJP, Abdullah candidly admitted the presence of a ‘Modi wave’.It remains to be seen whether the NC will take another U-turn and rejoin the NDA fold both in the state as well as the Centre.
Congress
With 17 MLAs in the outgoing assembly and having shared power with the NC, the Congress should have been in a better situation than what it is in today.The despondency that had set in the party rank and file after the Lok Sabha polls rout is yet playing spoilsport with the party’s chances.
Also, it has not helped that senior leaders like Ghulam Nabi Azad, who is leading the campaign, are calling its alliance with the NC as a bad experience. It appears the party is yet to learn from it Lok Sabha folly of doing negative politics.
The best case scenario for the Congress would be to get into an alliance with the PDP. Both parties have shared power in the past when Azad and Mufti Sayeed became CMs under a rotational agreement.
Jammu and Kashmir will go through five-phase polls on November 25, December 2, 9, 14 and 20. Zeenews.