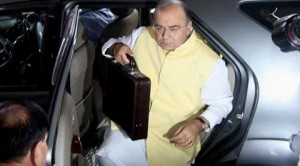 The Budget for 2014-15 on Thursday left income tax rates unchanged but provided sops to small and marginal assessees by raising the threshold exemption limit from Rs 2 lakh to Rs 2.5 lakh and investments under 80C by Rs 50,000 to Rs 1.5 lakh while promising not to bring tax changes with retrospective effect. Presenting the maiden budget of the BJP-led NDA government, Finance Minister Arun Jaitley raised the deduction limit on interest on housing loan for self-occupied property from Rs 1.5 lakh to Rs 2 lakh and free-baggage allowance for inbound passengers from Rs 35,000 to Rs 45,000.

LCD, LED TV to get cheaper The Budget makes cigarettes, tobacco, pan-masala, gutka and cold-drinks costlier by raising excise duties while CRT TVs used by poor, LCD and LED TV panels of less than 19-inches will be cheaper through cuts in customs duties.

In encouraging signals to domestic and foreign investors, Jaitley announced that all fresh cases arising out of retrospective amendments of 2012 in respect of indirect transfers will be scrutinised by a high level committee to be constituted by the CBDT before any action is initiated.

“I hope the investor community both within India and abroad will repose confidence on our stated position and participate in the Indian growth story with renewed vigour,” he said, offering a stable and predictable tax regime. He also said the government will revive the revised Direct Taxes Code (DTC) taking into account the comments of stakeholders. FDI raised by 49% The Finance Minister said government will promote FDI by raising the cap to 49 per cent in Defence and Insurance with full Indian management and control.

The Budget raises defence spending by 12.5 per cent to Rs 2.29 lakh crore. Non-plan expenditure for the current year has been estimated at Rs 12,19,892 crore with additional amount for fertiliser subsidy and capital expenditure for armed forces.

In an apparent reference to the previous government, Jaitley said slow decision making had resulted in a loss of opportunity and two years of sub-5 per cent growth in the economy has resulted in challenging situation.

He said government intends to usher in a policy regime that would bring the desired growth, lower inflation, sustained level of external sector balance and prudent policy stance. The Finance Minister said the present situation presentsva challenge of slow growth in manufacturing sector, in infrastructure and also the need to introduce fiscal prudence.

The tax to GDP ratio must be improved and non-tax revenue increased, he said while pruning the negative list for levy of service tax.

The government will constitute an Expenditure Management Commission to look into every aspect of expenditure reform. It will overhaul the subsidy regime while providing full protection to the marginalised.

GST to be introduced for higher revenue collection

Jaitely said the government would like to introduce the Goods and Services Tax (GST) to streamline tax administration, avoid harassment of business and ensure higher revenue collection. The Budget proposes to infuse Rs 2.40 lakh crore in PSU banks in which citizens will be allowed direct shareholding.

The Budget sets a target of Rs 8 lakh crore for agriculture credit during the current year and will continue the interest subvention scheme and raise the corpus of rural infrastructure development fund (RIDF) to Rs 25,000 crore.

Towards food security, the government commits itself to restructuring Food Corp of India (FCI), reducing transportation and distribution losses and efficacy of PDS.

Wheat and rice will be provided at reasonable prices to weaker sections.

In direct taxes, the Budget makes no changes in the rate of surcharge for any class of tax payer while continuing the education cess at 3 per cent for all. In manufacturing, considering the need to incentivise smaller entrepreneurs, it provides investment allowance at the rate of 15 per cent to a manufacturing company that invests more than Rs 25 crore in a year in plant and machinery for three years.

To enhance the functioning of income tax department as facilitators, 60 more Ayaykar Seva Kendras will be opened to promote excellence in service delivery.

Taking note of the fact that power supply continues to a major area of concern in the country, the Budget proposes to extend the 10-year tax holiday to undertakings which begin generation, transmission and distribution by March 31, 2017, instead of annual extensions. As part of financial inclusion mission, a special small savings instrument to cater to the requirement of education and marriage of the girl child will be introduced.

A National Savings Certificate with insurance cover will also be launched to provide additional benefits for small savers. In the PPF scheme, annual ceiling will be enhanced to Rs 1.5 lakh per annum from Rs 1 lakh at present.

In defence allocation, Rs 1000 crore has been set apart for implementing one-rank-one-pension policy. Capital outlay for defence has been raised by Rs 5,000 crore over the amount provided in the interim budget. War memorial, war museum to be set up

The Finance Minister also announced setting up a war memorial, war museum and a national police memorial. For modernisation of state police forces, Rs 3,000 crore has been allocated.

An integrated Ganga conservation mission, called ‘Namami Gange’ is proposed to be set up with an outlay of Rs 2,037 crore for this year.

An NRI fund for Ganga will be set up which will finance special projects. Rs 100 crore have been set aside for ghat development and beautification of river front at Kedarnath, Varnasi, Haridwar, Kanpur, Allahabad, Patna and Delhi. A 1,620-km Ganga inland waterway development from Haridwar to Haldia is planned to be completed in 6 years at a cost of Rs 4,200 crore, Jaitley said.