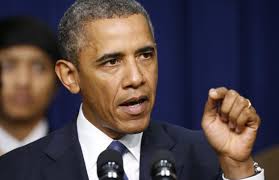 WASHINGTON: Even as US President presented a robust rhetoric about how to combat the monstrous advance of the Islamic State extremists, Senator John McCain denied that America was any safer than it was five years ago, adding that Obama’s failure to retain a residual force in Iraq led to the rise of the ISIS.
McCain was quick to find loopholes in the President’s plan, calling it ‘insufficient’ to destroy ISIS and in his statement enlisted some points that must be taken care of in order to defeat the Islamic State militants. Just an hour after the US President delivered a nationally televise speech, laying out his comprehensive strategy on dealing with the ISIS, Republican Senators John McCain (Arizona) and Lindsey Graham (South Carolina) posted their joint statement on Twitter.
However, the senators also seemed to agree to Obama on the way he explained to the American people why the US must confront ISIS. “He described the correct goal – to degrade and ultimately destroy ISIS,” said McCain, adding that the President’s “actions deserve bipartisan support and can degrade ISIS over time”. However, the senators said that the need to do so in Syria is “more urgent than the President conveyed”.
Calling the ISIS as the “world’s largest, richest terrorist army”, McCain suggested that to destroy the extremists, additional steps were necessary to create conditions for enduring security in the Middle East, and protect the American people. In the first point titled ‘US special forces and advisors’, Senator John McCain appeared to mock Obama’s oft-repeated “No US boots on the ground” policy saying, it didn’t make sense when more than a thousand US troops were already in Iraq. “No boots on the ground sounds odd when 1,100 US troops have been sent back to Iraq.
And more will be necessary,” said the Senator. McCain’s next suggestion was regarding Syria, where he said how US allies like such as Saudi Arabia, Jordan, UAE, Egypt, and Turkey must contribute forces to help lead ground combat operations against ISIS in Syria as they “have even more at stake in this fight” than the US. In the third point, the senator stressed on the urgency to topple Assad as “his regime has been complicit, directly and indirectly, in the growth of ISIS”.
“This will require taking out Assad’s air power, creating safe zones to protect civilians, and helping the Free Syrian Army to resist both ISIS and the Assad regime,” he added. In the last and the most controversial point, McCain appeared pointing the finger at Obama, slamming his decision to not leave any residual force in Iraq, which according to him, added to the rise of the ISIS.
Urging Obama to not abandon Iraq again, McCain said, “It is troubling that President Obama is unwilling to admit that his failure to leave a force behind in Iraq, as our military commanders recommended at the time, contributed to the rise of ISIS”. Warning the President to not repeat the mistake again, he suggested that the US should maintain a residual presence of forces in Iraq “to ensure that our gains against ISIS are enduring”. “None of the challenges that we now face in Iraq and Syria had to be this dire. The rise of ISIS did not have to happen.
We have lost too much time and missed too many opportunities. But we can still defeat our terrorist enemies, protect our people and our partners, and secure our national interests in the Middle East. The President’s plan will help us achieve these vital goals, but only if he remains committed to fully implementing every aspect of that plan. Half measures against ISIS only make it stronger and will not lead to its destruction.”