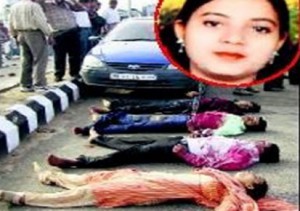 NEW DELHI: Former Home Secretaries R K Singh and GK pillai have claimed that the affidavit on the controversial Ishrat Jahan case was changed due to political reasons. Joining the debate, former Union Home Secretary R K Singh on Tuesday claimed that the affidavit on the controversial Ishrat Jahan case was changed due to political reasons.
“The main question is who asked for a change and for what reason. Obviously politics was played,” he said. Ishrat encounter: Ex-home secy Pillai ‘equally responsible’ for UPA’s affidavit change, says Chidambaram.  Singh’s predecessor G K Pillai said ex-Home Minister P Chidambaram had changed the affidavit, which originally described Ishrat and her slain aides as LeT operatives.
Singh, now BJP MP from Bihar, said what was the reason for the change of the affidavit when the Intelligence Bureau had said that Ishrat had links with Lashkar-e-Taiba terrorists.“She knew about her accomplice Javed Sheikh, that Javed had links with terrorists. She went to two places with Javed. She knew what was she doing with Javed,” he said.
Pillai on Sunday claimed that as Home Minister during UPA government, Congress leader Chidambaram had recalled the file a month after the original affidavit, which described Ishrat and her slain aides as LeT operatives, was filed in Supreme Court.
“Only after the affidavit was revised, as directed by the minister, did the file come to me,” Pillai is quoted as saying by a media report.
Former under secretary (internal security) in the Ministry of Home Affairs (MHA), RVS Mani, also came forward and said that the second affidavit was signed by him under pressure from the CBI.
The then UPA government had submitted two affidavits – one that the four, who were killed in an alleged fake encounter, were terrorists and the second saying there was no conclusive evidence – within two months in 2009.
Chidambaram yesterday said the second affidavit in the Ishrat Jahan encounter case was “absolutely correct” and as minister then “I accept the responsibility”.Chidambaram also expressed disappointment over Pillai distancing himself from the affidavit issue despite being “equally responsible”.
Ishrat, Javed Shaikh alias Pranesh Pillai, Amjadali Akbarali Rana and Zeeshan Johar were killed in an encounter with Gujarat Police on the outskirts of Ahmedabad on June 15, 2004.The city crime branch had then said that those killed in the encounters were LeT terrorists and had landed in Gujarat to kill the then Chief Minister Narendra Modi.
BJP alleged that P Chidambaram as Home  “The government is not closed to the option of a judicial probe in the entire episode,” Union Minister Ravi Shankar Prasad told today.
Two affidavits submitted by Mr Chidambaram’s home ministry to the Gujarat High Court in 2009 have pivoted the allegations swirling around the 2004 killing of Ishrat Jehan along with three others in Gujarat by police officers who claimed that she was part of a plot to assassinate Mr Modi, the state’s Chief Minister at the time.
The first affidavit on August 6, 2009, said Ishrat, 19, was a “woman activist of the Lashkar-e-Taiba” and the encounter was “not a fit case for a CBI probe.” The affidavit quoted Intelligence Bureau inputs, media reports and an apology by a Lashkar mouthpiece as proof of Ishrat’s terror links.
A revised affidavit on September 29 said “media reports do not constitute intelligence inputs and intelligence inputs do not constitute conclusive proof.” It also stated that the central government would have “no objection” to a CBI investigation into the 2004 encounter.
The home ministry official who drafted both the affidavits – RVS Mani – has alleged that he was “tortured” and pressured by the CBI to name the intelligence officers responsible for inputs on Ishrat’s alleged terror links.
Former Home Secretary GK Pillai’s charge that Mr Chidambaram bypassed him, “called a lower functionary in the Intelligence Bureau and totally rewrote the affidavit” has also been seized by the BJP.
The BJP alleges that Mr Chidambaram amended the document to suit his Congress party’s stand that Ishrat Jehan was innocent and shot in cold blood on the Gujarat government’s orders.
“We allege that Chidambaram wasn’t doing this on his own. He had orders from the Congress high command to do everything possible to frame Mr Modi and (BJP chief) Amit Shah before the next Gujarat polls,” Ravi Shankar Prasad said.
“Mr Chidambaram as Home Minister of India changed an affidavit to say there was no conclusive evidence to prove Ishrat’s LeT links. Can a home minister behave in such an irresponsible manner?” he questioned.
The home ministry is reexamining the Ishrat case files after the new allegations, which come days after US-based terrorist David Coleman Headley told a Mumbai court that Ishrat was an operative of the Lashkar-e-Taiba.